Can I Drive With The Dpf Light On

Can I drive with the DPF Light on?

The illumination of the DPF (Diesel Particulate Filter) light on the dash can be a daunting prospect, especially if you are some distance from home, and it is the first time that the DPF warning light has illuminated. Many drivers, will not even be aware of what the DPF light means, or that their diesel car has a diesel particulate filter fitted until the DPF light illuminates.

However, driving with the DPF light on does not always mean that you need to put your day or trip on hold, and if this is the first time that the DPF warning light has come on, then you don’t have to immediately take the day off work, or have the car towed to a garage and in most cases the car will continue to run just fine for a further few hundred miles without intervention, although there is an increasing chance that the car will run in “limp home” mode (decreased emergency performance mode) the longer that the dpf light is ignored, as the Particulate Filter will continue to block.

So the advice is to treat the illumination of the DPF warning light as an early warning, because that is exactly what it is – a warning that a small problem may eventually grow to become one with a £2000 price tag. When the DPF light comes on, the car computer is basically telling you that the particulate filter has not been able to regenerate normally at any point during the car’s daily usage pattern, and that the filter is now becoming blocked to the point where it will affect the cars performance and MPG, and eventually reach the point where it could cause damage, causing the car to switch to its emergency / limited performance mode.

Usually, when the DPF light comes on, it is the result of the car being used for mainly short journeys, around town or doing the school run and these kinds of trips are now considered very detrimental to a modern diesel car, and if this is your normal usage pattern then I would recommend that you change the car to a petrol or older (Non DPF) diesel.

In order to regenerate the DPF filter, the car has to be traveling at motorway (highway) speeds for at least 20 minutes on a fairly regular basis (every 300 – 400 miles ideally), this allows the perfect operating conditions (oil temp, engine temp, exhaust gas temp, steady rpm etc) to be created which, in turn allows the DPF to start its regeneration procedure.

If the car is frequently driven like Miss Daisy at 30mph everywhere, or used for nothing but short journeys such as the School run or in Town and City traffic then these ideal conditions are never created, and so the car computer can never obtain the correct parameters required to perform the regular, crucial regeneration cycles which it needs to do on a routine basis, and so the circle begins, with the DPF getting more and more blocked to the point where the DPF warning light comes on.

If the DPF light is ignored and the car continues to be used for short journeys, or in traffic then the DPF will continue to block with soot to the point where it no longer functions, and an expensive professional clean or a four figure bill for the replacement of the entire unit becomes the only remedial option. Further more, back pressure on the exhaust system due to a severe DPF blockage can cause premature wear on the Turbo bearings and may even, in some cases cause enough stress for the Turbo to fail.

So if the DPF Warning light has illuminated on your car, then you can continue to drive the vehicle, however I would strongly recommend that you follow the procedure below, at the earliest opportunity in order for the DPF to regenerate (clean itself of the soot its collected) and normal running to be restored.

Following the above procedure should allow the correct conditions to be created for the DPF to preform its much needed regeneration cycle, and effectively clean itself. This will, in most cases, fully regenerate the DPF and extinguish the dash warning light, avoiding the need for any expensive servicing or cleaning. However, If following the above procedure does not result in the warning light going off, then there may be an underlying issue elsewhere with the car, in this case please read the Alternatives to replacing a blocked DPF page for further advice.

The DPF light coming on is a clear indicator that your car use and driving style needs to be reviewed, and you should avoid using the car for trips like the school run or regular journeys where the car cannot reach and maintain its normal operating temperature for at least 25 minutes. If this is not possible then you should either consider getting a petrol engine vehicle or follow the procedure above at least once every 300 – 400 miles, in order for the DPF to clean itself and prevent the DPF light from illuminating again in the future. You should also add the Wynns additive to every tank of diesel, since this lowers the temperature at which a regeneration takes place resulting in problem free regenerations. 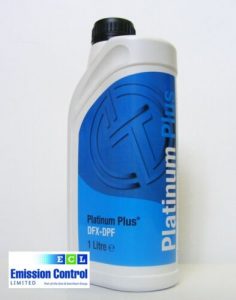 If you live in a city where short journeys in heavy traffic are unavoidable, then you should consider routinely using a specialist additive called CDTI Platinum Plus, (instead of the Wynns recommended above) this diesel additive was developed for Taxis and Buses operating in City centres and has been designed to not only reduce the temperature at which a regeneration takes place but also reduce the soot load entering the DPF to enable it to go for longer periods / higher milages between re-generations. The additive is expensive to buy but will last a long time, and it still works out far cheaper than taking the car to have its DPF professionally cleaned, or replaced.