What is a DPF

What is a DPF

Does my car have a DPF, What Does it Do?, Does it need maintenance?

Dpf stands for Diesel Particulate Filter (also called a ‘FAP’ on French Cars), and is a device which is fitted to modern Diesel engine vehicles and is designed to remove harmful soot particles from the engine prior to exhausting into the atmosphere.

Dpf’s are fitted under the vehicle, and physically look like traditional catalytic converters, however they can usually be identified as diesel particulate filters due to the number of pipes and electrical sensors fitted to the body.

A correctly operating DPF can remove as much as 85% of soot particles from the engine, some claim to achieve 100% in certain applications, but they can and do give problems!. 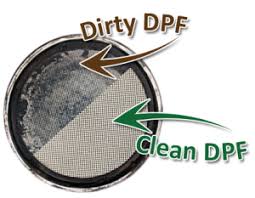 So what happens to the filtered accumulated particulate matter?. Well, the majority of Dpf filters are programmed to burn off the collected soot, and this is done either by using a Catalyst or a fuel burner which heats to over 600c to oxidize the accumulated ash, the whole process is referred to as Diesel particulate filter regeneration (DPF Regeneration) and is triggered by the car computer based for a period which is based on driving style., mileage, oil quality and a number of sensors located on the DPF unit itself.

Some early DPF equipped vehicles used an additive called Elyos fluid, and this was commonly used in Peugeot and Citroen HDI vehicles. The additive was trickled into the diesel tank at each diesel fill and helped carry out a combustion process at lower catalyst temperatures.

The existence of a DPF, will affect the way in which you run and maintain your diesel car compared to traditional diesel engines which don’t have a DPF unit fitted. For example, the DPF Regeneration process requires the vehicle to be run at motorway speeds for between 10 – 20 minutes on a regular basis, thus making them unsuitable candidates for Taxi’s, local door to door delivery vans or those owners who use their vehicles for short journeys. There is also a higher maintenance cost associated with DPF equipped vehicles, as they require special engine oils, regular cleaning schedules and can be expensive when they go wrong and have to be taken to the dealer.

Owners whose journeys / driving routine do not allow for the DPF the correct requirements to regenerate itself, will be faced with a blocked DPF warning. This is a small yellow / orange light on the dashboard which illuminates when the filter is around 60% blocked.  When this light illuminates, the owner is required to take their vehicle on a purposeful journey down the motorway at the earliest opportunity, this should allow the filter to clean itself and the light will extinguish. Driving styles should then be adjusted to incorporate one regular motorway journey every few weeks to prevent this problem from occurring again.

If the DPF Warning light is ignored, or if a forced regenerative drive is unsuccessful then your DPF is badly blocked and will require a trip to the dealer. The majority of dealers will then normally plug the vehicle into a diagnostic system and perform a ‘forced regeneration’ , the cost of this service varies from dealer to dealer but generally costs between £100 and £250.

On occasion, it may be found that even a dealer forced regeneration is unsuccessful and the only option will be to replace the entire DPF unit, at a cost of around £1000 – £2000

Sadly, DPF Failures are becoming far too common (as a quick google search will confirm) and many owners are facing regular visits to the dealer for expensive regeneration procedures and worse still, have had to pay four figure sums to have the DPF’s replaced on a relatively new vehicle.

Because the DPF is effectively considered an expensive consumable then a replacement is often not honoured under the vehicles’ manufacturers warranty, and so you may find yourself paying for a new DPF even if your car is still under its original manufacturers’ warranty, as it is down to individual dealer discretion as to whether a claim is paid out for failed DPFs.

At least one car manufacturer has issued a bulletin to state that they will not honour warranty claims for DPF replacements, if it is believed that the owner’s driving style and only making short journeys has contributed to its demise, a factor that is easily determined by the mileage you are covering between services.

In other words, if making short journeys or ignoring an early DPF warning light illuminating have resulted in your DPF failing, then you will have to pay the replacement bill yourself.

Suffice to say, that owning a modern diesel car just to do the shopping, take the kids to school or make a relatively short urban commute to work, is no longer financially attractive compared to using a petrol engined car or an older non DPF equipped diesel, because eventual failure of the DPF or its maintenance would quickly eat up any savings in fuel economy.

Either way, if you are considering purchasing a new diesel vehicle which has a DPF fitted, then you should also budget towards the additional maintenance costs, should you have any DPF problems in the future.