If you have recently bought or are considering a high mileage diesel car, or have had ongoing problems with your DPF blocking on a regular basis, then you may be tempted to have the DPF filter removed altogether to avoid the ongoing problems, which in many cases can be extremely expensive and difficult to stay on top of.

Unfortunately however, removing the DPF is illegal in the UK and can not only leave you with an expensive MOT failure, but can potentially leave you open to being uninsured or even being fined under the construction and use regulations. Since 2018 MOT emissions tests have also tightened significantly, meaning detection of DPF removal is now becoming more effective.

At this stage many diesel car owners face either replacing the entire DPF system, or paying for a professional company to remove and clean their DPF for them.

However, many car owners are also quite adept at maintaining their own vehicles, and are probably quite competent at getting under their car and cleaning the DPF themselves, which is much cheaper than paying somebody to do this for you.

The old practice of removing and then jet washing the DPF is no longer recommended as its not always possible to remove stubborn carbon deposits and solid ash accumulations with water alone. Fortunately there are now specialist cleaning chemicals which were only available before to the trade, now able to be purchased by consumers.

There are two methods of cleaning your own DPF on your own driveway. The first, is carried out with the DPF still on the vehicle and involves removing a sensor from the DPF Filter and then injecting the cleaner directly through the sensor hole, and the second involves removing the DPF from the exhaust system and then cleaning it with a jetwash and cleaning chemical.

Whichever you choose is simply down to personal preference and of course how accessible each method is from car to car. For example, it may not be possible to access the sensor in order to remove it, and so it makes more sense to remove the entire DPF filter from the car, and vice versa, where removing the DPF filter would be difficult.

So the two methods 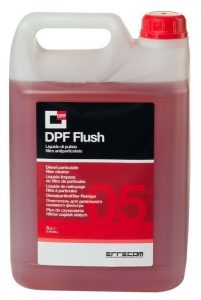 DPF Flush, used to clean out the internal honeycomb and stubborn soot accumulations in blocked DPF’s

This requires the full removal of the DPF Filter from the car, and flushing through the additive with water. 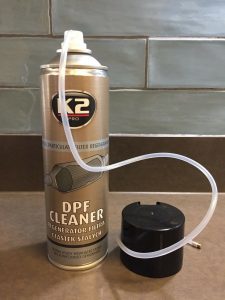 This DPF Cleaner, manufactured by the well known ‘K2’ brand is the very latest cleaning mechanism which allows for the DPF cleaning to be carried out with the filter in place on the car.

Cleaning out all of the soot and ash from within your DPF will not only remove constant issues with a blocked DPF, but also reset its condition almost back to as new and ensure many more 10,000 of trouble free miles out of your existing filter before you need to splash out on a new DPF.